Making a fish trap from a soda bottle

This is a trick I learned a few years ago on youtube. You need a empty soda bottle, scissors or a knife and ducttape.

Cut of the top of the bottle. You can just throw the cap away but keep the top because you will need it later.
Take the top and put it back on the bottle but reversed, like on the picture below. 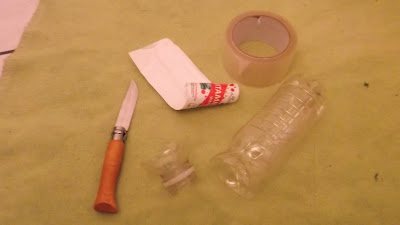 Now it's time to tape the two parts with ducttape. If you dont have ducttape then you might try sewing it instead. the plastic is thin enough for the needle to pass treu easily. 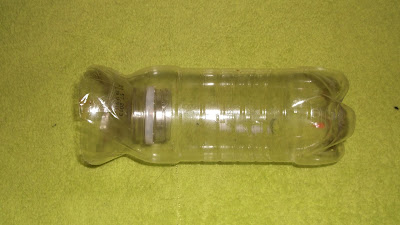 Now it's ready to use.. Before you cast it in the water put some weights in it (stones do just fine) so it stays at the bottom. Also put in some food to lure the fish.. bread, bugs.. fish eat a lot of stuff.
Now as to how it works.. When a fish enters the bottle and wants to get out it will follow the natural curves of the bottle. That's why goldfish in a round aquarium swim in circles alongside the walls of the aquarium. In a normal bottle the fish would have no problem escaping but this bottle trap, when the fish follows the sides then the bottle will lead the fish back inside... it can't find it's way out.

Next time you want fish on your plate remember this trap, it's easy and cheap and very effective.
Posted by Unknown at 1:00 AM

Email ThisBlogThis!Share to TwitterShare to FacebookShare to Pinterest
Labels: Tutorials