A quest for meat

Water is the most important thing to have in order to survive but without food your days will be numbered and miserable. Meat will be the most important thing on your food menu, it contains enough vitamins and protein to keep you going. It is a good thing to remember that almost (if not all) all fur animals are edible and all birds are edible. The best ways in order to get some meat is by hunting and trapping.. 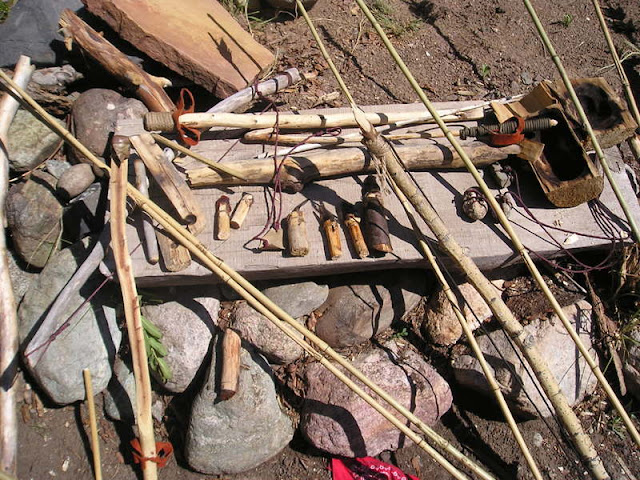 The Atlatl
This is a primitive weapon that is once again gaining popularity. These are nothing more but two sticks.. a long one made into a spear and a small one made as a throwing device. The spear rests on the thrower and by pushing it foreward the spear launces itself towards the target. The Atlatl works best for hunting big game. For more info check www.atlatl.com

The Bow
Bows are pretty easy to make if you want a simple bow and making straight arrows can be alot harder. Many people still believe it''s the string that makes the arrow fly away but instead it''s the handle itself that provides the spring. The bow can be used for hunting any type of game even fish.

The Rabbit stick
If you wonder what the oldest hunting weapon is, well this might be it. Rabbit stick are.. well.. sticks.
Rabbit sticks are also called Throwing sticks and in primitive times people would just pick up sticks and throw them at animals in a spinning motion. Later on they would shape sticks in order to make it more aerodynamic so they would be more accuracte, faster and they would travel further.

The Sling
We have talked obout slings before. In the wild all you need to know is how to make cordage and how to braid, that is how most slings were made. If you want to know more about slings lookup my article on this wonderful weapon or visit www.slinging.org.

The Boomerang
Yes.. those funny things people play with at the beaches an parks, those were once used by the Australian natives in order to hunt (mostly birds) and nowadays boomerangs come in many different shapes and sizes and they are can be made out of wood or plastic. Using a boomerang can be easy but some are difficult for beginners to use. Making a boomerang is also easy as long as you know how it should be made.

The Blowgun
This is a very famous type of hunting tool that is still being used today by many indigious people. It''s nothing more then a hollow stick (often bamboo). Now i''ll be honest, I don''t like the blowgun all that much, it is pretty hard to use and make (or so they say) and in order to make it easier to get a kill the darts are often dipped in some kind of poison and I don''t like the idea of poisoning the meat i''m going to eat. I''m sure you could neutralize the poison or something like that, I still consider it a risk. A great hunting weapon if there are no other options I guess. 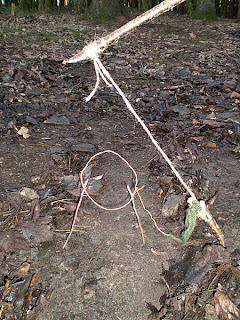 Snares
Snares are one of the best traps you can build to catch a dinner and they come in many shapes and sizes. One of the most populair designs is the one in the picture above, a Twitch-up snare, which is pretty easy to make. other designs are more complex but they all have one thing in common. They all have loops in order to trap an animal. Many people hate these kinds of traps, not because it is designed to trap and kill an animal but because it sufficates an animal, if the string does not cat an animal by it''s neck but by it''s leg for example an animal may lay there and suffer until it dies from starvation several days later. Therefore such traps should be checked several times a day. even better.. if you set up such a trap near the campsite then attach a little bell to the trap, that way you can hear when something set off the spring.

Deadfall
No.. we are not talking about the cheap movie here. Deadfalls are traps build to crush an animal and it is usualy made with a few sticks, a heavy log or stone and something for bait. The most famous design is the figure-4 deadfall and you can make them as big as you want. I once read an article about a guy who killed a bear with a figure-4.. quite impressive..

Other Traps
There are many other types of traps and if you want to make a trap you are only limited by your imagination. Some other famous traps are box traps which are great if you want to catch something without killing or harming it and then there ofcourse the household rat/mouse trap. Some other traps are effective but dangerous, these are made to kill big game but you can kill yourself with it instead if your not carefull.. these dangerous traps include the bow trap (when this trap is triggered an arrow is released at the target) and the Apache foot trap (a deep hole in the ground covered with debris with sharp stakes in the bottom pointing upwards, this trap was made famous thanks to the vietcong).

Well, thats it for now I hope you enjoyed for more info on types of traps and how to make them visit good old youtube, among the trash there are alot of useful tutorial on how to make traps (aswell as the hunting weapons).. see you soon