The Ancient art of Slinging

People started making slings during (perhaps even before) the Neolithic period as a hunting device but later on during the bronze age peoples such as the Greeks started using them in war and it stayed that way until the dark ages. Nowadays the Sling is used mostly for recreation by few people and it is the national sport of the Balearic islands near the coast of Spain but there are probably still tribes around the world using it as a hunting weapon. Sometimes they also show up in conflict areas such
as Palestine.

So what is a Sling?
Well, it is nothing more but a pouch with 2 pieces of string connected to it on either side. A stone (or other projectile) is put in the pouch, then by swirling the sling around and letting go at the right time the stone will fly away in a surten direction. The Sling can be considered the ancestor of the Bow. 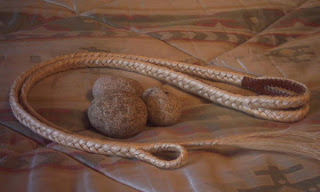 Types of Slings.
A sling can be constructed in many ways but usualy it involves some type of braiding. But making a sling is pretty easy.. is you can braid someones hair, you can make a sling.. It can be made with most types of string/rope, The one I have made is made from sisal twine but wool is also fine.
If braiding isn't your cup of tea then using 2 shoelaces connected to a piece of leather will do just fine. 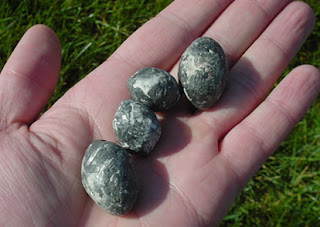 Types of Ammo
Round stones from riverbeds is what ancient man used most but after a while people started to use lead by casting it in special molds, the greeks were famous for this. But basically anything that is somewhat round or coneshaped and that has some weight to it can be used as ammo.
There are also items that can be used as safety ammo since slinging rocks can be quite dangerous and you might accidently hit others or even yourself. That's why many people use golfballs.. being hit by a golfball hurts like hell but it wouldn't kill you. I personally use potatoes alot when i'm out slinging in a nearby park or forest.. it's quite fun. 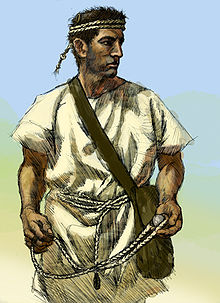 Slinging History
What is amazing to know is that most ancient civilizations have used the sling no matter what continent they are from. Want a quick list of some of these civilizations?
Sure..: The Greeks, The Romans, The Aztecs, The Apache, The Celts, The Saxons, The Egyptians, The Assyrians, The Rodians, The Minoans, The Iberians. And the list goes on and on.. It almost seems asif every country in the entire world has had their own slingers with Australia being the only exception.

Slinging as a sport.. The benefits..
Archery is a very populair sport worldwide while slinging is practiced by the few.
Making a sling is easy and the materials you need to make one are cheap. Ammo for the sling (when using rocks) is even free.. compare this with a bow.. But a sling has one important drawback compared with the bow. Learning to sling takes alot longer then learning archery.. hitting the bullseye of a target takes a long time with a sling, even from a short distance.. the bow clearly wins when it comes to accuracy.

If you want to know more about slinging visit www.slinging.org It's one of my favorite websites and it's full of info when it comes to slinging and it has many tutorials on how to make slings.
Posted by Unknown at 2:57 AM