Making all this stuff myself instead of buying it is great but I better test it out before I bring it into the field so today I tested the Hobo cooking set. Basically it is just a tin can to boil in (Billy can) and another tin can made into a woodburning stove. Instead of burning twigs in the stove I made a quick Buddy burner because I was affraid that wood would give to much smoke and may cause an alarm to my neighbours.
I decided to test it out in my shed.. that way I was outside but still sheilded from the wind and the eyes of curious neighbours.

So this is how the test went.. Boy was I in for a big surprise... 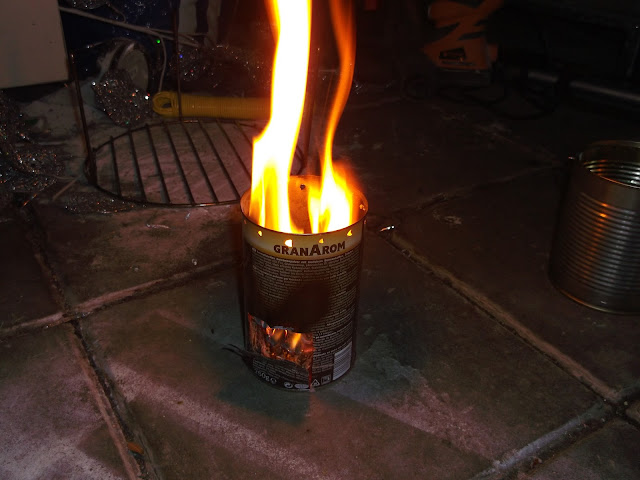 Once inside the backyard shed I put the stove on the concrete floor, lit up the buddyburner and putted it inside the stove, then I took the billycan, poured a bit of water in it and placed it on top of the stove.. Now I just waited for it to boil.

Soon I noticed that there was quite alot of smoke coming out from the buddyburner and along with it a terrible smell.   After just a few minutes it was asif I had entered the dark realm of Hades himself.. in other words smoke was everywhere, the smell was horrible and I even noticed that it was getting a lot warmer in my shed. I had turned my shed into a smokehouse. Instead of waiting for a boil I cancelled it and put the fire out.   Once I did that my girlfriend came and said that my neighbour came by to ask where all the smoke came from, worried that our shed might be on fire hahaha.
He need not to worry, that'll be the last time I burned anything in there. 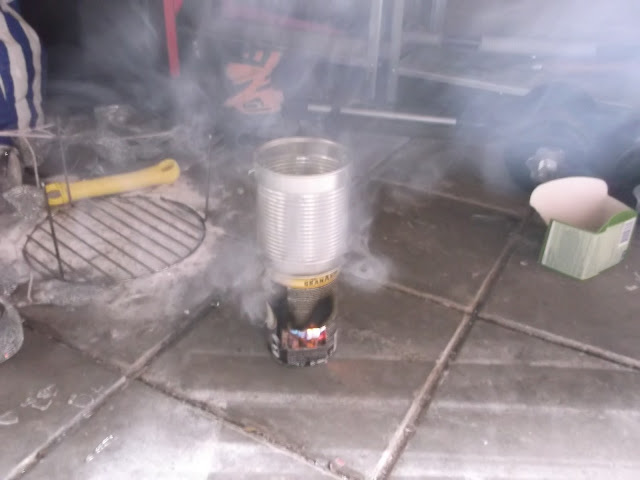 Hobo Tin Can Cooking set
Worked great and after cooling down there was no damage dispite the heat. I did not get the water to boil but after putting out the fire. the water was very warm. So what can I say; Screw all those pots and pans, this will do the job perfectly at no costs what so ever.

Buddy Burner
All you Bushcrafters and Survivalists out there, forget all you knew about making signal fires! Just bring a buddy burner with you... What a let down.. Yes this realy is a long lasting candle indeed but the smoke and smell makes it horrible. Not something I would like to be cooking on.
Posted by Unknown at 12:36 AM