Alone in the wilderness: Fear

When you're in a situation like me there are a lot of things that could scare me when thinking about my oncoming journey.

Dangerous animals, poisonous plants, hypothermia, dehydration, starvation and injury.
It is not going to be a picknick and there's nothing romantic to it. Making a living in the wilderness is hard and not for the squeamish. There are a lot of ways to die in the wilderness and there are just as many ways to die in an urban enviroment, the types of threats are only different.

In the US the most dangerous wild animals are the Grizzly bear and the Mountain lion (or so they say). In Russia where I'm heading there are actualy Tigers.. The (if I remembered correct) Amur tiger in the south and the Siberian tiger in the north. Many people who are lost in the wilderness die of hypothermia, Russia's temperatures can get down to -50 degrees celsius in the far north, In the far south near mongolia the country turns into a desert where people can find themselves being cooked while being attacked by one sandstorm after another. Russia is far to big to have one single climate.
It figures that staying somewhere in the middle, where boreal forest meets temperate, is my best bet.

Then there are other types of fear that could overwelm me out there.. The fear failling my quest, the fear of 'losing it' and go nuts or get a psychosis (had one before, wasn't a lot of fun), The fear of not seeing my children again or how they might curse my name later on, The fear of people trying to keep me from doing what I have to do.

Fear kills.. at the same time fear can save your life.. This needs a little explanation..
Too much fear can stop you in your tracks, fear can occupy the mind which makes it harder to think clearly, fear can drive you mad.
Being completely without fear might kill you even faster. Just imagine a person who is totaly fearless for a minute.. Such a person would walk up to an annoyed male african rhino and smack that ass if you would ask him to without even blinking. If you look at it like that, fear can be a good thing to have. 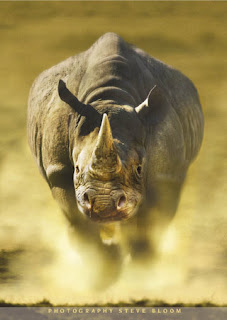 We should not be without fear yet fear should not control us either but meet somewhere in the middle, this is called being cautious
Posted by Unknown at 10:01 AM