Here are some pictures of all the stuff i'm hoping to take with me when i'm off living in the wild. Some of the items are simply usefull in order to survive but I also pack items that will help me fight boredom and some items simply have an emotional valeu. There's a lot of stuff that I bought and also stuff that I made myself since i'm the creative type of guy. I also realise that I might not be able to bring all of this stuff with me because I will be travelling by bicycle and i'm not an athlete. I now realise that buying the 100 liter Alice backpack probably was'nt such a great idea if I better travel light. 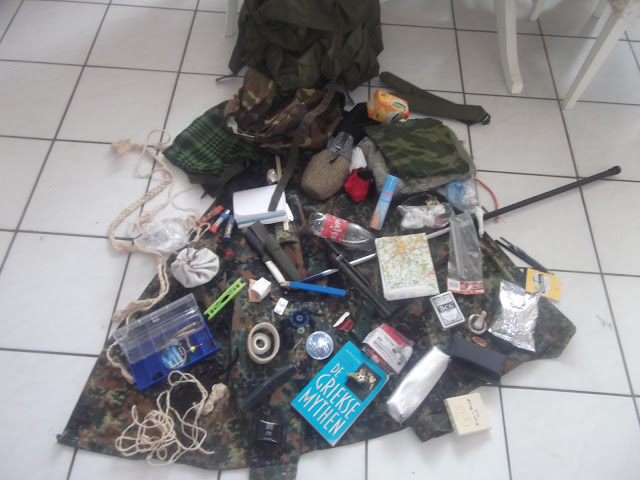 What a mess! So what do we have here?.. All of the stuff lays on top of a (modern) German military jacket that I bought to keep me warm during the colder seasons, The blue book is about Greek mythology for entertainment. The map seems usefull and an important thing to bring along but it's just a map of Holland and a small part of west Germany which is not that great. there's also a fishing rod, shemach, russian military t-shirt, waterbottle, a sling and smaller stuff. 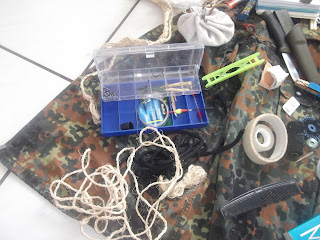 When it comes to finding food i will rely on fishing alot since I have some experience with fishing.. this picture shows my fishing kit. since this pic was taken I bought alot more fishing gear such as fishing leads, more hooks but laso more fishing rods. this picture also shows my bushcraft knife, a Mora compaignon. 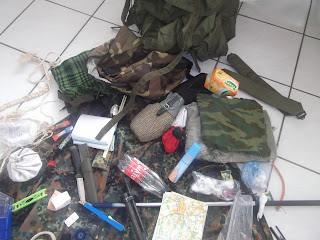 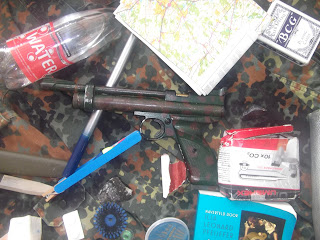 This picture shows my airgun (don't wanna eat fish all the time) it's a crossman 2240 with a shoulderstock (not on the pic) It shoots .22 (5.5mm) pellets and it's perfect for hunting rabbits and similair small game. it has it's drawbacks.. I find it hard to be accurate without a scope and it's powersource are co2 cartridges, so once all my co2 bulbs are empty I might just as well throw the piece away even if I still have pellets. But I am experienced with airguns and it's small so I might aswell bring it with me.
These pictures are just to give you an idea of the stuff I'll bring with me once I leave home. There are a few very important things that are not on these pictures such as a fleece blanket and food.. During the early stages of my journey I will travel through Holland and Germany where it's illegal to hunt and fish without a license and I want to obey the law as good as I can. but I still have to eat  so I will be packing food that's easy to cook and that will keep me going such as rice, pasta's, cans of tuna and such
Posted by Unknown at 10:53 AM