I bought my 2240 with a shoulder stock, a pack of co2 cartridges and .22 hollowpoints a few years ago and I bought it for one reason only; to hunt with.

Warning: some of the following pictures contain images of shot animals and may be considered shocking.. even though I highly doubt it..

About the Crosman 2240
The 2240 is a bolt action airgun that shoots .22 (5,5mm) pellets, It's a Co2 pistol that with the help of a shoulderstock becomes more of a rifle. But there are a lot of accessories available for this nice crosman. It's great for plinking but it packs enough power for small game hunting such as rabbits and squirrels.

but I have to be honest and tell you that it has a few disadvantages..  Dispite it being pretty accurate with such a short barrel the open sights are horrible so buying a scope will be a good idea, however the 2240 has a plastic top/breech so that has to be replaced with a metal one making the 2240 cost you twice as much. The simple facts that it uses Co2 cartridges as the power source can be a problem for some, Not only do you have to buy both ammo and Co2 in order to shoot it you also have to count the number of shots you fired (so you know when the Co2 is running on empty). The only other disadvantage I can think of is that it's quite loud for an airgun.

The best thing about the 2240 in my opinion is it's size, even with the shoulderstock it's quite small and portable. This thing is also very cheap and it's sold at Pyramidair for $57.95 and airgun enthusiasts often buy this cheap "toy" in order to convert and upgrade it into something awesome.

Airgun hunting.. the ups and downs

When it comes to hunting many people consider airguns to be toys for kids while firearms are for the big guys. however hunting with airguns is just great because they are usually cheap and silent. when you shoot you don't scare away nearby prey and when you use it for pest control in you backyard you are not annoying the neighbours, when you miss, who cares.. a pellet costs near to nothing. 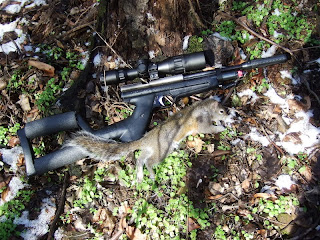 Airgun hunting gains popularity but it is not aloud everywhere so be sure to first check out what your local law has to say about it. In my country for example I am not aloud to hunt with an airgun, even if it's for pest control (sure, i have shot several birds in my yard, just don't tell anyone ;) ) When you pick an airgun be sure to buy one that does the job. Some airguns are too weak to even kill a small sparrow while other airguns are powerful enough to kill a big moose (no joke!) so that would be overkill for rabbits.
When you've picked a perfect airgun it's time to buy the perfect ammo. Choosing the right ammo is an important part when it comes to hunting. Pellets come in many different shapes, weights and calibers, most airguns﻿ shoot either .177 or .22 pellets and there''s an old saying.. ".177 for feathers, .22 for fur".. in my opinion you can shoot birds with a .22 but shooting a rabbit with a .177 often ends up just hurting the animal, not a good idea.

Just some of the most common pellet shapes
When it comes to the shapes of pellets remember that most shapes are ok for hunting. the most common pellets are wadcutters (above pic on the left) these can be used for hunting but are meant for field target, the best pellets in my opinion are hollowpoints and the worst being round balls that look just like bb's they tend to be very inaccurate and the often destroy the inside of the barrel. there are also pellets made exclusively for hunting. experiment﻿ a little and find out what works best for you. 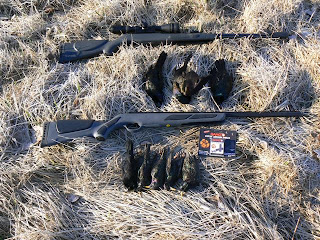 Bird hunting.. guns appear to be Gamo's
For more information about airgun hunting check out these websites
http://americanairgunhunter.com/
http://airgunhuntingforum.lefora.com/
Posted by Unknown at 1:14 PM