Where will you go?
I can't say, I do not have a final destination yet.. All I can say is that I made a route from here (Holland) to the Polish border.. It was a hell of a job since my printer is out of order.. had to make a route in Google Maps and write it all down!!! haha.. Once I reached the Polish border I will be probably heading east/south-east deep into the Russian forests. I might find a place where I could stay for the rest of my life or I might choose to live a (semi) nomadic lifestyle.

When will you be back?
Who said I'll be back? If I can't stand living in the wilderness anymore then, and only then, I will return and live in an urban area again (In Holland or elsewhere) But the goal is not to return to society

Why are you going to live in the wild?
Because of several reasons.. Because I feel the need for adventure, Because I feel the need to do something extraordinary and because I want to see how it is to live a life off the grid, off the net and off the land and be completely self-sufficient. But also because I do not feel happy living in a society where money has become more important then people. Like I have said many times before.. I'm not a social person so I will do fine or even better by myself (but I do not hate people, that's not the same).

Will you keep posting during your journey?
No, once I'm off the grid I'm also off the net, So I won't be posting on this blog, on google+, facebook or anywhere else in the virtual world. Go ahead and follow this blog, post comments, but I won't be able to read and response.

What if you become injured?
Well that's a risk i'm willing to take and it's a big risk aswell.. If I would break a leg right here, right now the I will be in the hospital within an hour. Out there I will have to be more carefull.. breaking a leg equals a slow and painfull death. I will try to avoid things like rock climbing and crossing wide rivers with a strong current and other things to avoid injuries

What's your method of Transport?
The Bicycle.. That is untill I can cycle no further because there will be no more roads. Then I'll ditch it and walk on. You can read all about why I choose a bike in order to travel on the blog.

How long will it take to cycle such a distance?
I can't tell

Isn't this just suicide?
No.. Many people have done what I'm going to do.. Many died and many lived to tell the tale. Read up the story of Dick Proenneke who live in the Alaskan wilderness for 30 years and died of old age. It is a risk I am willing to take. But it will be hard and there is always a risk, There are many ways you can die in the outdoors, there are also many ways to die in a city.. I can get hit by a car, fall of the stairs or get murdered tomorrow.. so thinking that life in a urban inviroment is safe is an illusion. Rather living in the wild is suicide or not also depends on your level of wilderness skills knowledge. If I would head out into the wild without learning any skills and rushing things then yes, it would have been suicide.

What about money?
What about it? Many people dream of having loads of money, I dream of ancient times when we did not need money. Money, in my point of view, is the worst invention of the human race.. back to the basics for me folks.

Are you going alone?
Yes, I have been contacted by multiple people if I'm looking for a traveling buddy. but I'm not. Most of them were not too serious about it anyway.

Are you leaving in secret?
Yes and No, I will write a letter to my mother and father as to why I leave but I will send them once I've walked out the door. I'm also thinking about sending a letter to the police, just to let them know that I'm not missing.

Won't you miss people?
I have always been a loner but yes there are some people that I will miss from time to time such as my sister, mother, father.. And my children most of all, that will be a huge struggle and they will be on my mind every day.  But i'm just not the type of person who will go nuts without any form of human contact.

Do you advise others to do this aswell?
NO!!! Because leaving society and living in the wild is a choice that either totally changes your life or ends it rapidly. Those who head into the wilderness should already be knowing at least basic wilderness/survival skills otherwise it would be suicide indeed. They also should have the right mindset in order to make it out there. They should be able to do more with less (minimalists) and they should not be social creatures (loners) like me and they better love the outdoors.

What will you eat in the wild?
Because I'm an experienced fisherman there's a big chance that my future diet will be about 80% fish.
Did you know that all freshwater fishes are edible? That is always good to know. But everyone likes some variety so I will be doing some hunting and trapping (small game only) for meat and I will be harvesting wild edibles as well. Everything except Fungi since it's not worth the risk. But in theory a man can grow old by eating nothing else but fish and meat (or so they say, not to sure if anyone tried it.)

How can I contact you?
You can comment me on my blog or you can send me an e-mail at: Dutchhermit@live.nl
I'm also at Google+ so you can talk to me there aswell.. That is.. untill June of course 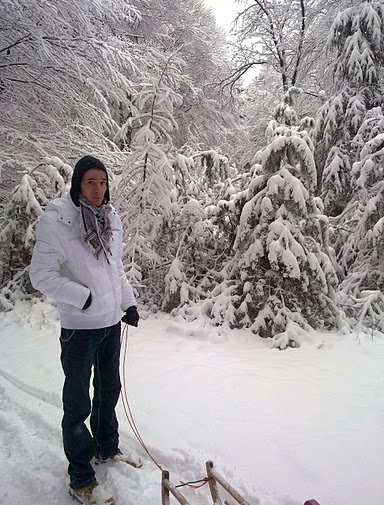